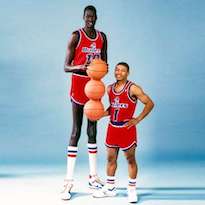 Cristina kicks off the show with a basketball related myth in honour of her beloved Toronto Raptors; did NBA legend Manute Bol really coin the phrase ‘My Bad’? As the only TRC co-host who is not married, Darren scrutinizes an article citing research that suggests unmarried people are happier, probably just to rub it in. Finally, Adam vents his Fornite pet peeve that the game just doesn’t get the Doppler Effect.

Deadspin: Did Manute Bol coin the phrase my bad

Fortnite Vs The Doppler Effect

What Is The Doppler Effect? – 5 Minutes with an Astronomer

[Self] The speed of the bus in fortnite does not match the speed it should have, according to the doppler effect – r/theydidthemath on Reddit

This entry was posted in The Reality Check Episodes and tagged happy, sports. Bookmark the permalink.