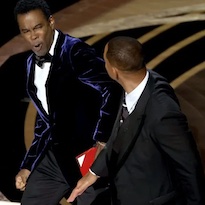 As Will Smith’s slap during the Academy Awards trends online, a picture of the moment has gone viral suggesting Chris Rock wore a prosthetic cheek pad. Cristina digs into it. Next, Adam takes a look at the science, or more precisely lack thereof, in the latest sci-fi flick, “Moonfall”.

No, Chris Rock Wasn’t Wearing a Pad on His Cheek When Will Smith Slapped Him

How NASA Helped ‘Moonfall’ Make the Moon Fall – The Ringer

5 Responses to TRC #648: Slapgate Conspiracy + The Science Of Moonfall