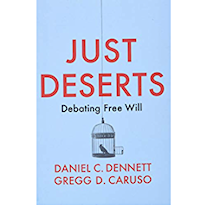 On this week’s show, Darren takes a deep dive into a well of ideas discussed in “Just Deserts” by Daniel Dennett and Gregg Caruso. The book features a debate between the two famed philosophers regarding their views on a range of topics like free will, moral responsibility and legal punishment. Darren recorded the segment with Adam and their ensuing conversation was quite interesting, so we decided to release it as a full show.