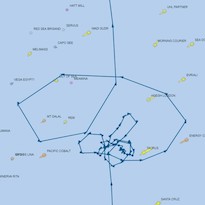 Cristina kicks off the show by diving hip deep into the conspiracy theories swirling around why the massive container ship Ever Given is blocking the Suez Canal. Adam ponders whether maps are racist after seeing an angry online commenter suggest as much when replying to a post featuring a world map. Darren really did read or listen to more than 100 books last year and he’s here to tell you which titles he thinks are worth your while.

Dislodging the huge ship blocking the Suez Canal could take ‘days to weeks,’ as the traffic jam builds

Did Cargo Ship ‘Draw’ a Penis Before Getting Stuck in Suez Canal?

‘Anything you see in the stores’ could be affected by Canal logjam, shipping experts say

“Your Map is Racist” Here’s How – Sociology In Focus

The Precipice by Toby Ord

The WEIRDEST People in the World by Joe Henrich

Warnings by Clarke and Eddy

The Caped Crusade: Batman and the Rise of Nerd Culture by Glen Weldon