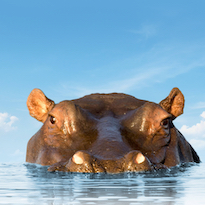 After we posted a funny meme on TRC’s Facebook page, a couple of Checkers question whether hippos can really swim so Pat goes on a mission to find out. Simple yes or no answer, right? Not on this show! Darren breaks down Neil deGrasse Tyson’s tweet and apology around recent U.S. shootings that made some people more than a little upset. Finally, Adam gives us a cool art history lesson after visiting an exhibit on Leonardo da Vinci and realizing the Mona Lisa may not be who she seems.

The Atlantic – How Do Hippos Move Through Water

This entry was posted in The Reality Check Episodes and tagged animals, art, social media. Bookmark the permalink.